Put a Fork In It!
45. Ralph Erenzo, Co-Founder Hudson Whiskey and Tuthilltown Distillery 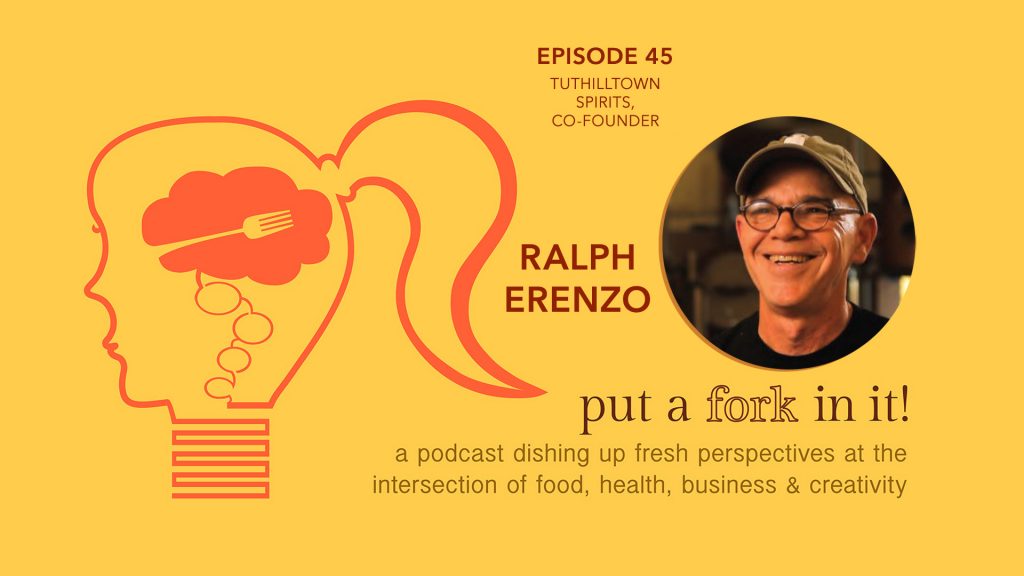 Ralph brings 35 years of production and development experience to the distillery. Prior to starting Tuthilltown Spirits, his business ExtraVertical Inc. provided technical services to corporate and media clients for projects that required technical skills developed over his 25 year rock climbing career. Ralph built and managed New York City’s first public climbing gyms including The ExtraVertical Climbing Center on Broadway. His dream of a “climbers ranch” near the largest rock climbing area in the East were set aside in favor of producing high quality spirits. Ralph’s writing and commentary have been featured in national media including Op Ed columns for the New York Times. His work at the State level has resulted in the passage of the Farm Distillery Act which permits New York farms to establish distilleries on site and sell their agricultural spirits at the farm. Born and raised a New Yorker, he has realized a lifelong dream of settling in the Hudson Valley.

Before Prohibition more than 1,000 farm distillers produced alcohol from New York grains and fruits. In 2005 Tuthilltown Spirits brought the tradition of small batch spirits production back to the Hudson Valley.

For 220 years Tuthilltown Gristmill, a landmark which is listed on the National Register of Historic Places, used waterpower to render local grains to flour. In 2003, Ralph Erenzo and Brian Lee created Tuthilltown Spirits LLC, converting one of the mill granaries to a micro-distillery. Two and a half years later, Tuthilltown Spirits produced their first batches of vodka from scraps they collected at a local apple slicing plant.

Today, Tuthilltown Spirits distills Indigenous Vodka from apples grown at orchards less than five miles away and the highly awarded Hudson Whiskey line, using grain harvested by farmers less than ten miles away.   The Visitor Center offers guests the opportunity to taste the collection of whiskeys, vodkas, gins, liqueurs, and other unique, handmade spirits.  Tours illustrate how Tuthilltown’s spirits are made by hand, one batch at a time.  Guests are encouraged to stay for the day and enjoy the family-friendly environment.

Innovation at Tuthilltown is snowballing thanks to the input of over 50 hardworking and creative team members. New products, cocktails, dishes, and tour improvements are brought to fruition each week.   Tuthilltown Spirits is proud to have been the early bird in the post-prohibition New York distilling scene.  The team is now at the forefront of the craft distilling movement and is quickly building legacy of sustainable growth.

This episode features Ralph Erenzo, co-founder of Tuthilltown Spirits Distillery in Gardiner, NY and Hudson Whiskey. Tuthilltown was founded on the property of an old grist mill, and became the first distillery in NY since prohibition.

I had been to the distillery to capture some images for a story for Upstater a while back, but last year I went back for a Young Professionals event, and Ralph shared his story. I was fascinated and his story really is a testament to what can happen if you set your mind to something and keep at it.

In addition to the distillery, I was also intrigued by Ralph’s former love, rock climbing. As a hobbyist indoor climber, myself, it’s always fun to be able to connect with others who are into the sport.

This was a fun and inspiring conversation, and I hope you enjoy it.