Jamie Schler writes stories inspired by food, culture, travel, and the real people she meets in real life, every day. Jamie has worked in the world of art in Philadelphia and New York, as a milliner in Milan, Italy, and gastronomic tourism in Paris. She now lives in Chinon, France where she owns and runs the Hôtel Diderot with her husband. An award-winning freelance writer, her work has appeared in The Art of Eating, Fine Cooking, France Magazine, Modern Farmer, Leite’s Culinaria, and The Kitchn among other publications. She blogs at Life’s a Feast and her first cookbook Oranges will be published by Gibbs Smith in the autumn of 2017.

The building that now houses the hôtel Diderot goes back to the 15th century, and its history is entwined with that of the neighbouring Saint-Mexme collegiate church, as it probably housed one of its prelates. Before the hotel, a family of public servants – the Baillons – lived in the main building, and the right wing hosted the archives of the city of Chinon.

Roger Lainel, a former submarine officer turned hôtelier bought the buildings in the early ’60s to turn them into an hotel. With his second wife Moricette, he ran the place until 1979 when he sold it to Théodore and Françoise Kazamias. In 2003, three siblings – Laurent, Françoise et Martine Dutheil – took over the Diderot and passed it on, in 2015, to Jean-Pierre et Jamie Dagneaux.

Jam-making at the Diderot goes back to the origins of the hotel : Moricette Lainel prepared plain, traditional jams with the fruits of her garden. Angelica – as in, “Peach and angelica” – was her signature. Until 2016, she lived close to the hotel and brought us fruits from her garden, allways with angelica.

When she took over the hotel, Françoise Kazamias developed the jam-making operation and introduced new flavors and varieties inspired by her years in Africa. Thus came the apricots, bananas, and pelargonium scents. Theodoros, her Cyprus-born husband, suggested figs, anis, rose, orange blossom and bergamot. During his 15 years at the Diderot, Laurent Dutheil introduced new varieties in the hotel’s jam repertoire, bringing the tally to more than 50.

When she arrived at the Diderot, Jamie Schler-Dagneaux, an accomplished baker and cook, had little choice but to maintain the tradition. She took over in February 2015, just in time to process the oranges from her native state, Florida, and adding her own personal touch to the flavors of the jams she creates. 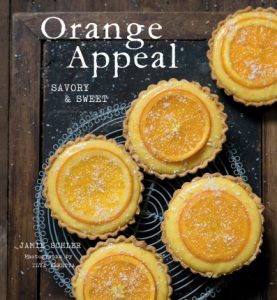 Jamie Schler offers a collection of sophisticated and sunny recipes using the most versatile of citrus fruits, the orange, in this beautifully photographed cookbook. She incorporates the juice, zest, and fruit from many varieties of oranges as well as flavorings, extracts, and liqueurs.

We first met at the International Association of Culinary Professionals conference a few years back. Being that I’m such a francophile, the subject of France and speaking French naturally came up with some people at the conference – those people all pointed me in the direction of Jamie.

Upon meeting at the conference, I knew I needed to talk to her on the podcast, not only to learn more about her food adventures – but surely there’s an interesting story or two involved to be an American who owns a hotel in a small, little known medieval city in the Loire Valley of France.

It took a while to get there, but we made it happen – and in person no, less! You heard that right. This interview took place right in the kitchen of Hotel Diderot in Chinon, France – complete with Jamie’s cat meowing in the middle.

I loved having this opportunity to talk with Jamie and learn all about how she went from Brooklyn to Paris, to making hats in Italy, publishing a cookbook and owning a hotel.

If you love our show, please support us by: