This past week I had the pleasure of, yet again, shooting for Newsday – this time, though, it was of the 4th of July fireworks!
Last Wednesday I walked down Haviland Road in Highland, NY to take on the crowds at the Walkway Over the Hudson… when I noticed the much of the crowd was actually heading back in the other direction, both by foot and in cars. Confused, I asked passersby what was going on and was told that those in charge were not letting anyone out on the bridge due to concerns about lightning. It’s true, the forecast was not good. Cells of random thunderstorms were popping up on the radar, going away just as quickly as they had appeared.
Determined to get photos from a good location, I continued on my journey – unaccepting of the rumor. And to my good fortune, the moment I arrived at the entrance of the bridge, an announcement came over the PA system that the bridge was now OPEN!
I hurried on with the other people who decided to brave the weather, and attempted to find a spot good for taking photos. Though, this proved to be rather challenging, as it would turn out: once the show began, everyone who had been seated in portable chairs stood up at once – blocking my frame. And though I had my camera on a tripod, it only goes so high. So, it’s a good thing I managed to get the images I did.
It was really nice to see the show from the vantage point of the bridge – we could see all the fireworks along the whole horizon, which actually amounted to several different towns along the river and in the Valley. We also had the opportunity to see lightning in the distance as a natural sideshow to our manmade light-show.
The images can be seen on Newsday, by clicking the image below. Each is © 2012 Caylena Cahill/Newsday, All Rights Reserved. If you are interested in obtaining a copy of any of the images, please send me an email. 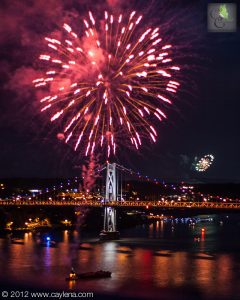 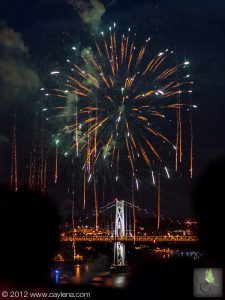 Also – here is an image of lightning that I captured after the show:

Click here to buy a print of this image!