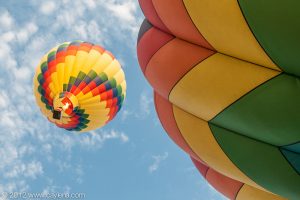 What would you do if your assignment editor called you and said, “So… how would you feel about riding in a hot-air balloon?”
Personally, I just about exploded with excitement! Sure, it might be scary to be suspended 1000 ft in the air by nothing but a balloon and a wicker basket… but it’s the opportunity of a lifetime! Get paid to fly and take pictures of the experience?! YES! Count me in!
So the only time the media is allowed up is 6am on Saturday, says my editor, is that ok?
Uhg. Well. I’ll deal with it – seriously, is this real? I’m going to ride in a balloon?!
Well, Saturday morning, 4 o’clock… My alarm starts ringing. Fifteen minutes later I’m out of bed and in the shower. I guess it’s time to be awake.

I arrive to the Hudson River Rowing Association in Poughkeepsie at just around 5:30 am, the time I’m told I should arrive for a 6 am launch. I quickly park, exit my car and begin the search for my contact – the Dutchess County Regional Chamber of Commerce’s communications director. He brings me to my hosts for the morning: Matt McClinton and Gary Dunlap of SkyCab Balloon Promotions in Louisville, KY, who will be taking me up in the AT&T balloon.
First I talk for a few minutes with them and then I go take some shots of the rest of the scene: several large balloons on the ground in every stage of the process, flat, slightly inflated and almost complete defying gravity. 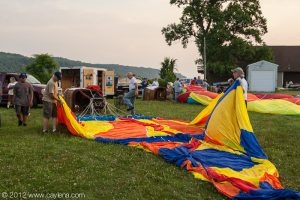 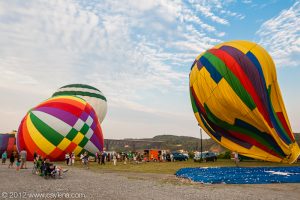 Once I decide that I have enough shots of this part and of the assembly and firing of the air inside the balloon, I head quickly back to Matt and Gary, much anticipating my soon-to-come ascent.
I learn that Matt, 22, will be my pilot and I will be his sole passenger for the morning. He shows me a spot on the balloon and tells me to put my head in and take a photo while he shoots fire inside to heat the air. “When I give you the thumbs up, you come out,” he says. I put my head in, snap some images of fire streaming towards me – but, he was right, it was pretty far from me – and quickly exit the balloon when I see his signal.
Soon enough, our balloon is in the air and I climb into the handmade wicker basket – which also holds 3 large containers of gas – and is no larger than about 4′ x 4′ and comes up to around mid-torso (I’m only 5’2″). 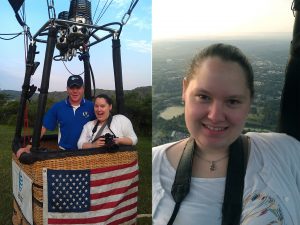 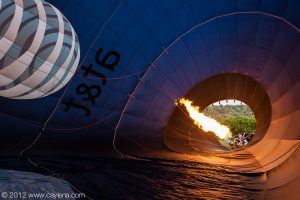 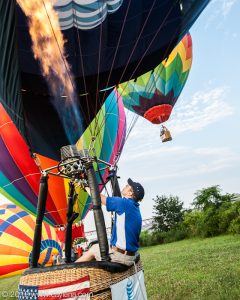 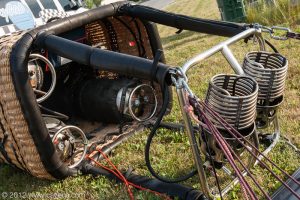 And with that, we’re off. In a surprisingly ultra smooth take-off – much less terrifying than I had expected.
Matt flies us over the river, going up and down, and even touching the water. I shoot away and he tells me about flying balloons, as we make go, up, up and away over Poughkeepsie. 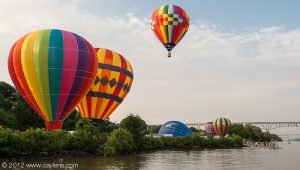 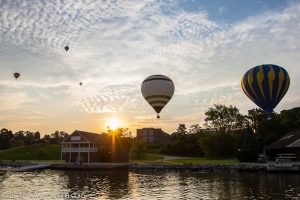 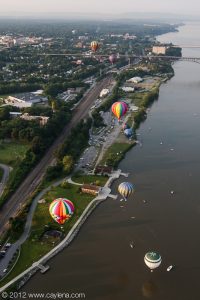 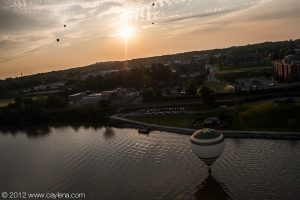 I learned more than I had ever known about, so-called, ballooning while floating peacefully through the sky, up and down, and to the east. Matt told me about how the way the wind changes at different altitudes and how to use that, in combination with the temperature and amount of air inside the balloon to “steer” is. He told me about how he got interested in ballooning, “I was basically born into it,” he said. His father was also a pilot, so he had his first ride very young and then became a pilot at age 14. “It really is an addiction,” he said, “it’s something that if you go to long without, you get the itch to get back up in the air.” 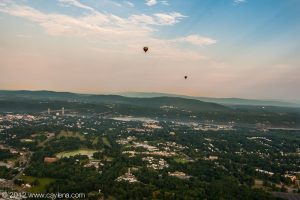 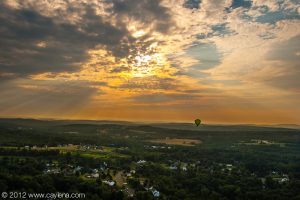 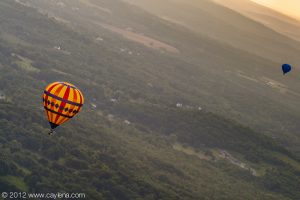 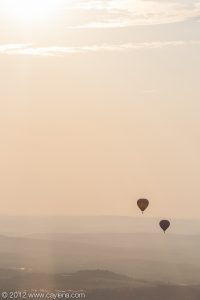 After about an hour of serene flying into the sunrise, it was time to land. Slowly we descended toward a nice cul-de-sac about 5 miles from where we took off. As we neared the ground, Matt’s partner Gary came toward us to “catch” the basket and help to place us in a strategic location for deflation and disassembly of the balloon. 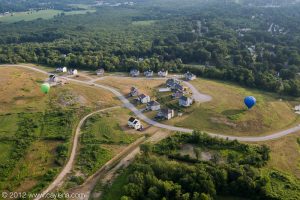 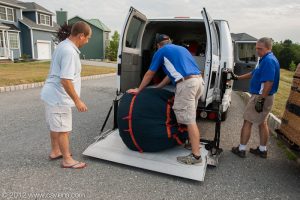 Residents of the neighborhood came by to see the activity and get a quick demonstration of the basics. After all was said and done, deflated and packed up, out came the champagne and story: in the beginning times of ballooning, those who took flight began the tradition of bringing a bottle to offer up to the residents of the land upon which they had landed, as a way to show that they were indeed friendly neighbors.
Later in the day, after editing, my 60+ images and a short video were posted to Newsday.
(Disclaimer: Quotations in this story are paraphrased, but accurate in message.)
All images are © 2012 Caylena Cahill/Newsday, all rights reserved. To obtain copies of a particular image, please contact me with the details. 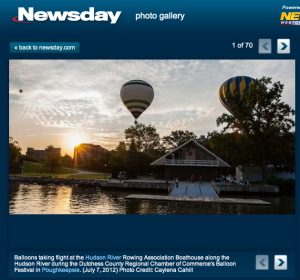