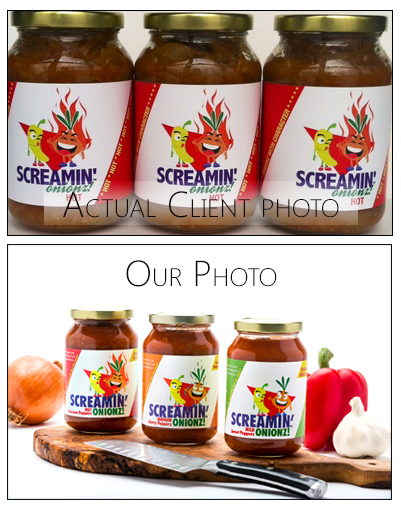 This is a client’s actual before/after comparison photo. They sent me this photo from their website, that they actually were using. The bottom is ours from a shoot we did together.
You can see, in the client’s photo, that the crop is very tight, which means it actually cuts off the edges of the products. If you wanted to extend the image for an ad, you couldn’t because the jars are cut off, whereas with ours, you could extend the top of the image as much as you want because it is pure white. Note, we also took photos of each jar alone, with white surrounding it, so it could be cut out and put onto any background.
Additionally, the before photo was taken at close range with a cell phone camera. I can see this because of the distortion of the shape of the jars.
The top photo was lit from the front, which is bad for glass products because it shows the reflections of whatever is in front of the product. Proper lighting for reflective items is generally from the side, back and/or top (from slightly behind), which also adds to showing the shape of the item. In the top photo, the jars look flat, whereas in the bottom photo, they look round, and you can see the angle of the top of the jar, thanks to the reflections.
Ours were light with a large round softbox above, slightly behind, pointed down towards the back of the jars, and white board reflectors on each side of the set up.
Another point, the top photo (client’s before) was such low resolution, that I had to make the other photo so small to match, that’s why it’s not bigger, as it would make the image blurry to make it larger.
What differences do you see?

Back to Basics: 2b – Are Your Photos Helping or Hurting Your Lead Generation?

The Photography Your Business Uses May Actually Turn People Away

(Back to Basics // Part 3a) Lead Nurturing a.k.a. Dating, Business-style