I recently had the privilege of doing some promotional work for SUNY New Paltz. The school of fine and performing arts at SUNY has a few summer programs for high school students – one for piano and one for studio art.

5 Minutes of Chaos – Why Preparation is Key

The first assignment they called for was a new promotional shot of the performers/instructors of the PianoSummer program. They thought, since the photo they were using for years was of the instructors in casual clothes next to a tree, that they would like to replace the image with something a little more relevant – the instructors on the stage next to the piano, dressed up. Because they were having a formal performance anyway, the goal was to do the shot right at the end of the performance, before they headed to the reception area. I was originally told I’d have 15 minutes to do a few different shots….
Well… in reality, I am so glad I prepared by drawing up a story board and preparing how I would do the lighting/posing, because I actually only had less than 5 minutes to pull it off.
The show ended, I entered through back stage, set my lights stands down, ran into the mezzanine, and tested my lights. Meanwhile, the main instructor/performer is asking if I’m ready, and the lighting person is asking me if I need more or less, the audience is leaving the theatre, and some other SUNY employees are introducing themselves to me.
After a few test shots, and sprinting to turn my light stands slightly to eliminate lens flare (back lighting so the black piano and black outfits don’t get lost into the black curtains in the back of the stage) I have what I deem to be good exposures. (Side note – if you’re going to backlight on a stage and do a wide shot that includes the floor…. make sure to sweep or vacuum, so the light doesn’t call attention to a dirty floor.)
The next challenge… getting the 7 people arranged in a composition that works. Like I said, I had a plan. Well… plans only work when everyone listens and cooperates. So, we had to keep it simple, since it was loud and frantic, and my subjects were not so keen on doing a photo shoot – for a variety of reasons, none of which had to do with me actually doing photos.
So, I managed to get them to do two different arrangements. With groups, it’s important to take several shots to insure everyone has their eyes open, is looking the right way, etc. So I did several, though given the short time, I also faced technical difficulties of flashes not having enough recycle time, etc. In the end, I’m happy with how it turned out, in spite of it all, and everyone was pleased with my work under pressure.
This is the shot I preferred:

The second shoot they called me for was to create “documentary” style images to promote a studio art program for high school students, called StudioLab.
The program consisted of three different classes I was to photograph over 2.5 hours – a drawing class, a sculpture class and an installation class.
The drawing class turned out to be an interesting challenge, in terms of lighting. Why? Because all the students were in a dark hallway with poor, boring overhead lights. So, instead of plopping my flash on the camera and pointing it directly at my subjects (creating unflattering direct light and dark backgrounds, and mixed color temperatures), I put my flash on a stand, used a gel to match the color of the light from the flash to the color of the available light, and, generally speaking, placed the light behind my subjects, to give them a bit of a pop. I focused on trying to get interesting angles, even though there was not a lot of space, and the students used the wall as an easle with large paper to draw self portraits. I tried to incorporate their mirrors and elements of their drawings to make the compositions more interesting.
In the sculpture class, I used available light – which already was already an interesting look and had mixed colors – with window light and artificial overhead lights. I focused on getting interesting action shots of the students creating their sculptures. In this class, I had a lot more space and ablility to create interesting angles – climbing on chairs, crawling under tables, and laying on the floor. When it comes to getting the shot, I’m really all over the place… that’s why you’ll never see me wearing a dress or skirt when it’s time to take photos, what with rolling around on the ground and climbing on top of crazy things to get taller.
Anyway, here’s a gallery of my favorites from that day. 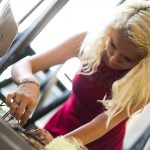 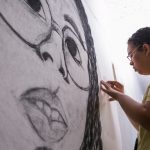 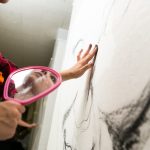 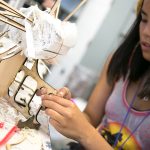 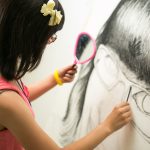 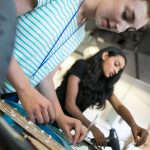 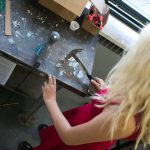 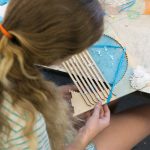 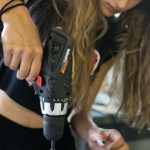 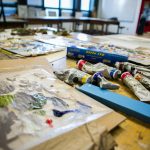 Flying High in a Hot Air Balloon, Oh My!

Nightlife photos from Mahoney's up on Newsday.com!